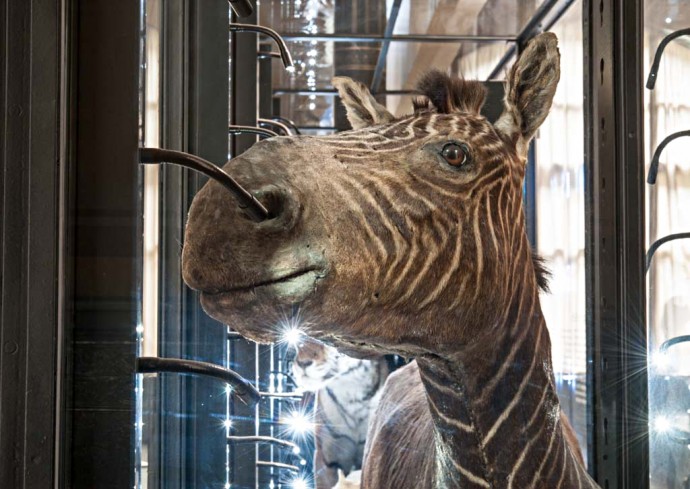 The Gaze of the Quagga

Head held high, tense and frozen in uncertainty; curiosity and surprise mirrored in its stance, watchfulness embodied in its posture, suspicion radiating from its eyes, captured in a moment of life; a lifeless object animated by illusion only; half-thing, half-animal, a stuffed statue, almost within a touch’s grasp. From behind the glass, the zebra watches us with thoughtful, lively eyes – or at least, that is the illusion we choose to believe.

The brown hide, with its characteristic white stripes around neck and head, reveals the object to be a quagga, a subspecies of the plains zebra in South Africa, named and classified by Dutch naturalist Pieter Boddaert. A subspecies now extinct: the last wild populations had already been killed during the 1870s, while the last living Quagga died in captivity in Amsterdam in 1883.

Knowing this, we now look at it with different eyes, and suddenly, the animal’s gaze, too, does not seem curious and surprised any more, but saddened, frightened. It makes us wonder: is this the last of the quaggas, or is it “merely” one among many to have been killed long before its kind’s extinction, but one that would function as a foreshadowing of what was to come? No matter its origin, this object is loaded with meaning: a whole kind killed for the thrill of the hunt, the hunt for trophies, for scientific knowledge – it is a symbol of our shame, and its gaze should make us look away but we cannot.

With fascination and disgust we behold the state of the object. 150 years have left a visible mark upon the appearance of this stuffed zebra. Its dusty hide seems bleached, worn-out, like a coat worn for too many decades – and is its hide truly nothing more than a piece of clothing, used to conceal reality behind illusion? Is this not rather a heap of hay stuffed and sewn together, cloaked beneath a real-life skin to make it look like a once living, breathing animal? But as can be seen with this object, reality, over decades, works its way into the outside; seams break open, hay bursts out – reality is bursting out of this illusion.

This is not a zebra, it is a stuffed statue. This is not an animal, it is an object, so do not expect to meet an animal’s gaze – the only reality to be seen, if we have the courage to look, is a visual example and evidence of the destructive effects mankind has on the world of animals.

Unlike other zebras, the quagga’s brown and white stripes were restricted to the front of its body.

Taxidermy today is a complicated process including molding or sculpting the form of the animal before putting the skin on it. Earlier taxidermy used simpler methods and materials – as shown by the straw escaping from this quagga.

”From behind the glass, the zebra watches us with thoughtful, lively eyes – or at least, that is the illusion we choose to believe.”

Maria Graf is a student of English and History. She noticed the Quagga when she visited the museum with the course Critical Animal Studies, which discussed human-animal relationships. 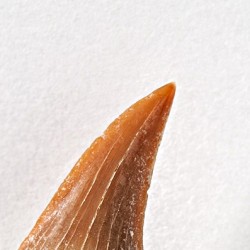 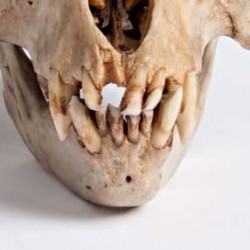